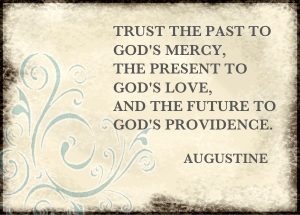 I know that it may sound odd to say that one has a “favorite” doctrine.  If I were pressed to offer a favorite, the doctrine of providence would be mine. I say this for at last two reasons.  First, it is incredibly comforting to know that my heavenly Father is actively working and watching over my life.  He is not passive in the affairs of His children, or of His world. He is working, daily, for the good of His people.  Everything that happens, regardless of what it may be, is for His children and their overall well-being (Rom. 8:28).  Second, it is comforting to know that our God in heaven is not aloof but intimately involved in the affairs of men.  Even a casual look around at the affairs of this world would scare the average person.  The news of current events, from N. Korea to the Middle East; the events of terrorism and ISIS, to the core workings of our government, her leaders and the laws they make can often leave one to despair.  Our God in heaven reigns.  There is nothing outside His grasp — from the little events of our lives, such as a flat tire, to the big events of national policy, none of these things escape His notice, and none of them are outside His sovereign control.

The Westminster Larger Catechism, as well as the Confession of Faith, while doctrinally solid and useful theologically, is also useful pastorally. It reminds us that the true God of Scripture is not silent or absent.  It tells us that He is working and ruling in the affairs of my life, your life and the lives of everyone He has created. From the sun rising and setting, the birds chirping and the bees buzzing God is actively working.  From the crises in N.Korea to the affairs of state in the Middle East, God is working.  He rules and reigns and always works for the good of His people.

The next time you face difficulty in this life or experience the blessing of a wonderful day, remember that God ordered it for your good.  Though those “dark providences” can be difficult to understand, it has been ordered by a loving Father who desires your good and the good of His church. Remember, also, that those times when life is going well were also ordered by God.  Regardless of good or bad, remember to praise Him, ascribing glory and honor to your heavenly Father who is working for you.

1. God the great Creator of all things doth uphold, direct, dispose, and govern all creatures, actions, and things, from the greatest even to the least, by his most wise and holy providence, according to his infallible foreknowledge, and the free and immutable counsel of his own will, to the praise of the glory of his wisdom, power, justice, goodness, and mercy.
2. Although, in relation to the foreknowledge and decree of God, the first Cause, all things come to pass immutably, and infallibly; yet, by the same providence, he ordereth them to fall out, according to the nature of second causes, either necessarily, freely, or contingently.
3. God, in his ordinary providence, maketh use of means, yet is free to work without, above, and against them, at his pleasure.
4. The almighty power, unsearchable wisdom, and infinite goodness of God so far manifest themselves in his providence, that it extendeth itself even to the first fall, and all other sins of angels and men; and that not by a bare permission, but such as hath joined with it a most wise and powerful bounding, and otherwise ordering, and governing of them, in a manifold dispensation, to his own holy ends; yet so, as the sinfulness thereof proceedeth only from the creature, and not from God, who, being most holy and righteous, neither is nor can be the author or approver of sin.
5. The most wise, righteous, and gracious God doth oftentimes leave, for a season, his own children to manifold temptations, and the corruption of their own hearts, to chastise them for their former sins, or to discover unto them the hidden strength of corruption and deceitfulness of their hearts, that they may be humbled; and, to raise them to a more close and constant dependence for their support upon himself, and to make them more watchful against all future occasions of sin, and for sundry other just and holy ends.
6. As for those wicked and ungodly men whom God, as a righteous Judge, for former sins, doth blind and harden, from them he not only withholdeth his grace whereby they might have been enlightened in their understandings, and wrought upon in their hearts; but sometimes also withdraweth the gifts which they had, and exposeth them to such objects as their corruption makes occasions of sin; and, withal, gives them over to their own lusts, the temptations of the world, and the power of Satan, whereby it comes to pass that they harden themselves, even under those means which God useth for the softening of others.
7. As the providence of God doth, in general, reach to all creatures; so, after a most special manner, it taketh care of his church, and disposeth all things to the good thereof.

Subscribe To The Newsletter of Bill and Gwen Hill: The Hill Report

Stay in touch with Bill and Gwen.  Updates are sent once a month and contain news, praise and prayer requests about the church and the family.

Thank you for subscribing to our monthly newsletter!

This site uses Akismet to reduce spam. Learn how your comment data is processed.